On May 23, 1926, Western Air Express inaugurated the “first scheduled airline passenger service” in the United States, flying the nation’s first commercial airline passenger from Salt Lake City to Los Angeles. Although a few early airboat ventures provided regularly scheduled service along coastal locations prior to 1926, this first flight by Western Air Express would give birth to the first year-round airline transportation service using landplanes and land-based runways. This “fixed route” overland passenger service marked the beginning of passenger airtravel in the U.S. as we know it today. It would also serve as the inception of what would go on to be referred to as the “first profitable airline in the world” and the only successful survivor of the nation’s early commercial air transportation ventures.

THE FIRST COMMERCIAL FLIGHT AND PASSENGER

Upon arrival of this first commercial flight, there was a ceremony that included presentation of the certificate below, which is now part the BirthofAviation.org collection. Signed by Western Air Express pilot Jimmy James, it confirms Mr. Ben F. Redman of Salt Lake City, Utah as the first official passenger. Today, through the Delta family tree of airlines, the ticket issued to Mr. Redman remains the oldest passenger airline ticket of surviving legacy in the U.S. 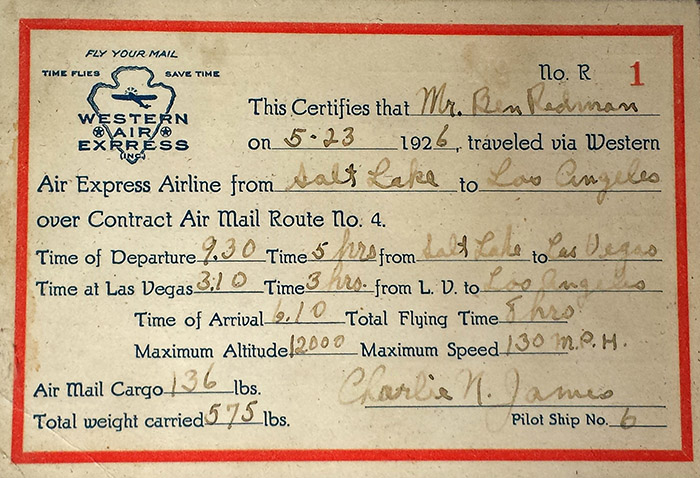 Certificate presented in a ceremony after Western Air Express’s inauguration of passenger service on May 23, 1926, which represented the first “regularly scheduled passenger flight” in the United States. Part of the BirthofAviation.org Collection.

It was a momentous event. As the Deseret News reported, “Opening of passenger service between Salt Lake and Los Angeles by Western Air Express, Inc. Sunday marks the dawn of regular commercial aerial passenger traffic in America.”

It was to be the first time in the history of U.S. aviation that daily aerial passenger service has been offered by a commercial air line on a fixed schedule, said the paper, quoting James G. Woolley, traffic manager who had arrived on Friday’s mail plane to complete the arrangements.

“Since that chilly April 17 morning when the open plane took off, W. A. L. has made aviation history. On May 23, after the first flight, Ben F. Redman, Salt Lake City businessman, became the first person in the United States to fly on a regularly scheduled route.”

“He sat on mail bags, ate a box lunch, and paid $90 for the privilege of flying from Salt Lake City to Los Angeles to make aviation history.”

An article on the history of Salt Lake International Airport from The Desert News on Sept 26, 1980 discusses the Redman’s historic airline reservation:

“Ben F. Redman’s unusual hobby was being first – and he wanted very much to be the nation’s first airline passenger. As a stockholder of Western Air Express he had attained a priority status, so he wrote to the air mail contracts division chief and expressed his desire, enclosing a $20 check as a deposit – thereby making the world’s first airline reservation.

Redman and another Salt Lake resident J.A. Tomlinson, showed up at the airport in overalls, helmets, goggles and parachutes. They held box lunches on their laps and sat on top of mail sacks, listening as pilot Jimmy James explained how the parachutes and crude toilet facilities worked.”

Quote from the Harris M. Hanshue page at the the Nevada Aerospace Hall of Fame:

Referring to the low interest loan awarded to Western Air Express by the Guggenheim Fund to support a “model airline” experiment that was to benefit the entire aviation industry, the Harry Guggenheim page for the National Aviation Hall of Fame states:

“This fund, totaling $3 million, included an equipment loan for operating the first regularly scheduled commercial airline in the United States.”

Robert Serling describes the first flight in his book, The Only Way to Fly: The Story of Western Airlines, America’s Senior Air Carrier:

“They took off at 9:30am and five hours later landed at Las Vegas to refuel. Redman and Tomlinson staggered out of the plane to stretch their legs and would have been forgiven if they had refused to reboard; for a good portion of the trip they had flown through a dust storm, and both passengers were pale from fatigue and nervousness. But they also were game, and three hours later climbed more or less jauntily out of the M-2, waving to the crowd of photographers and reporters gathered at Vail Field to record the arrival.” 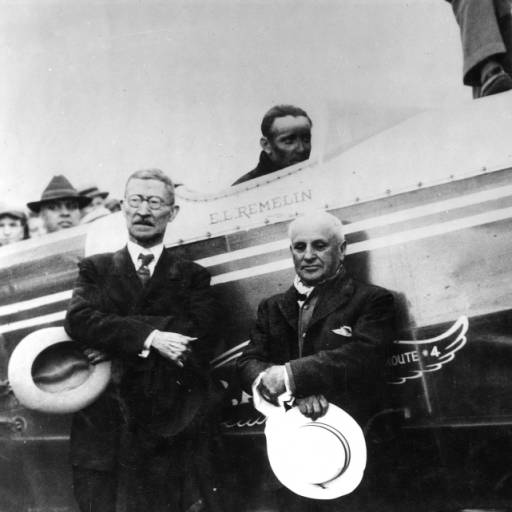