Western Air Express stakes its claim as being “the world’s first economically successful air transportation system” (as shown in the postcard shown below commemorating the First Anniversary of the inaugural airmail flight of Western Air Express). While some airline ventures in various parts of the world began passenger service before Western Air Express, Western Air Express boasts of being the first to reach profitability – doing so starting in 1926, its first year of operation.
(Show full copy of postcard)

HERE, where a multitude of natural advantages have enabled an ultra-progressive people to project the ultimate in modern civilization, prosperity and health walk hand in hand – industry is alive and living is a pleasure. An equable climate the year around combines with geographic and topographic features to make SOUTHERN CALIFORNIA unrivalled as an agricultural, industrial, home community which has attracted a population increase of more than TWO MILLION in the past fifteen years.

That SOUTHERN CALIFORNIA has in a brief twelve months outstripped the nation and assumed world leadership in the race to adapt the airplane to commerce is just another tribute to the enterprise and vision of its people. 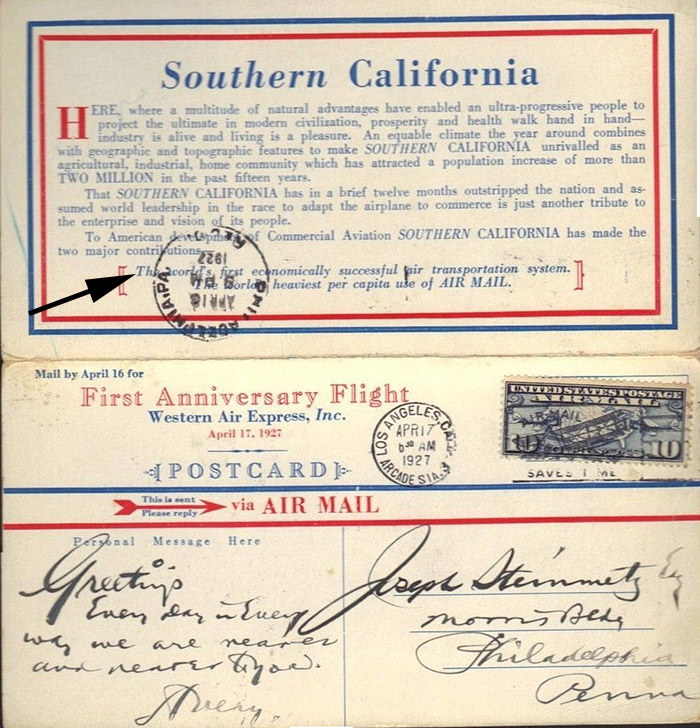 James G. Woolley, Vice President in Charge of Traffic for Western Air Express, writes of his company’s achievement in Airplane Transportation. a book used as a textbook at the University of Southern California and other schools to teach the business elements of the arising new industry of commercial aviation:

“In the autumn of 1927, the faculty of the University of Southern California decided that increasing popular interest in airplane transportation warranted development of a non-technical course which would appeal to those interested in the business elements of this new industry. For such an undertaking Los Angeles was most fortunately situated because of the air-consciousness of its people, and the further fact that it was the home of the world’s first economically successful venture in airplane transportation [emphasis added]”

Claude Gray writes in the February 1976 edition of The Vintage Airplane:

Western Air Lines, is the only survivor of a handful of airlines that pioneered commercial air transportation in the U.S. in the mid-twenties…[Its first route in 1926] gave Los Angeles its first transcontinental air service and put Southern California on the air mail map.

Aviation was in its infancy in those days and there was a certain amount of bravado attached to facing the elements in the open-cockpit planes. Standard equipment for passengers was a flying suit, goggles, gloves, parachute and lots of courage.

Much to everyone’s surprise, when 1926 came to a close, Western had a net profit of $28,674.19. And by October 1927, Western became the first airline in history to pay a cash dividend to its stockholders.

An article on page 3 of The Ogden Standard-Examiner from April 17, 1951 describes the historic dividend:

“By Oct. 1. Western -was in a position to declare the first dividend ever paid by an air transportation company engaged solely in commercial operations and dependent completely on earned revenue. Pioneer investors on that date received a 2 per cent dividend: the company registered a $306,974.53 profit for the year.”

Tom D. Crouch, senior curator of aeronautics at the National Air and Space Museum, writes in Wings: A History of Aviation from Kites to the Space Age:

“The pioneering postwar airline ventures in England, France, and Germany enjoyed some early successes. British and French air services carried sixty-five hundred passengers between London and Paris in 1920, with the three British operations carrying perhaps three times as many passengers as their French counterparts. At the same time, actual revenues amounted to only 17 percent of total costs.”

What the Sacramento Valley Railroad had once portended for transportation in California and the West was not lost on Harris Hanshue, a Los Angeles airline executive. Writing nearly seventy-five years later in Aeronautics magazine, he dared to compare his airline, barely four years old, to the state’s pioneer railroad, which despite its auspicious beginnings had become an integral part of an important industry. Hanshue’ s essay was remarkably prophetic because Western Air Express, the carrier he headed, had recently become the first airline in the United States to make a profit carrying passengers without the benefit of a federal airmail subsidy.